Toward a genosonic lens: Linking the anatomy of a “screech” to language and body

Toward a genosonic lens: Linking the anatomy of a “screech” to language and body

By dissecting Rush Limbaugh’s and Howard Stern’s unfair but culturally salient descriptions of Hillary Clinton’s and Beyoncé’s vocal sounds as “screeches,” this essay offers a potential lens for scholarly and cultural description and analysis of the voice and its characterizations. This perspective, which I call the “genosonic lens,” builds on Barthes’s concept of “the grain of the voice” to argue that the voice is an extension of both body and language. I focus on the physical and affective connection forged between the speaking mouth and the hearing ear while acknowledging the power of language to shape and reshape this intimate relationship. The purpose of the genosonic lens is twofold. First, I aim to demystify the affective nature of the relationship between the speaking voice and the listening ear. By concretizing the affective nature of the voice, I work to demonstrate why vocal sound remains both illusive and powerful. Second, through my analysis, I demonstrate some possible methods for more objectively approaching the study of spoken vocal sound. In doing so, I hope to offer a possible intervention for the sexist and racially problematic adjectives used to discipline voices like Clinton’s and Beyoncé’s through description. 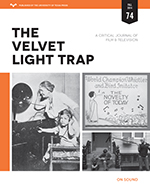